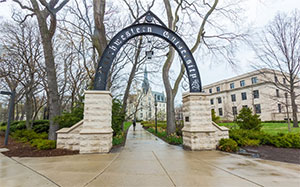 founded in 1851, by a group of Methodist business leaders

Northwestern University is a private research university based in Evanston, Illinois, with other campuses in Chicago and Doha, Qatar, and academic programs and facilities in Miami, Florida; Washington, D.C.; and San Francisco, California.

Evanston was formally incorporated as a town on December 29, 1863, but declined in 1869 to become a city despite the Illinois legislature passing a bill for that purpose. Evanston expanded after the Civil War with the annexation of the village of North Evanston. Finally, in early 1892, following the annexation of the village of South Evanston, voters elected to organize as a city. The 1892 boundaries are largely those that exist today.

Evanston is situated 12 miles (19 km) north of downtown Chicago, bordered by Chicago to the south, Skokie to the west, and Wilmette to the north. It had a population of 74,486 as of 2010. It is one of the affluent North Shore communities that adjoin Lake Michigan. The boundaries of the city of Evanston are coterminous with those of the former Evanston Township, which was dissolved in 2014 by voters with its functions being absorbed by the city of Evanston.

In 1854, the founders of Northwestern University submitted to the Cook County judge their plans for a city to be named Evanston after John Evans, one of their leaders.

Prior to the 1830s, the area now occupied by Evanston was mainly uninhabited, consisting largely of wetlands and swampy forest. Potawatomi Indians used trails along higher lying ridges that ran in a general north-south direction through the area, and had some semi-permanent settlements along the trails.

French explorers referred to the general area as "Grosse Pointe" after a point of land jutting into Lake Michigan about 13 miles north of the mouth of the Chicago River. After the first non-Native Americans settled in the area in 1836, the names "Grosse Point Territory" and "Gross Point voting district" were used through the 1830s and 1840s, although the territory had no defined boundaries. The area remained only sparsely settled, supporting some farming and lumber activity on some of the higher ground, as well as a number of taverns or "hotels" along the ridge roads. Grosse Pointe itself steadily eroded into the lake during this period. 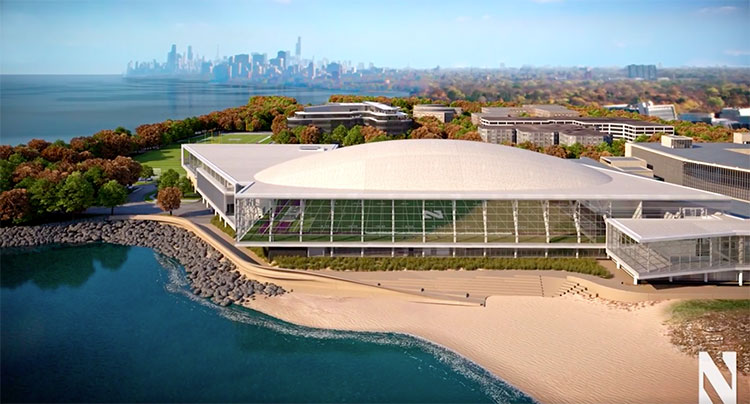 In 1850, a township called Ridgeville was organized, extending from Graceland Cemetery in Chicago to the southern edge of the Ouilmette Reservation, along what is now Central Street, and from Lake Michigan to Western Avenue in Chicago. The 1850 census shows a few hundred settlers in this township, and a post office with the name of Ridgeville was established at one of the taverns. However, no municipality yet existed.

In 1851, a group of Methodist business leaders founded Northwestern University and Garrett Biblical Institute. Unable to find available land on the north shore up to Lake Forest, the committee was ready to purchase farmland to the west of the city when Orrington Lunt insisted on one final visit to the present location. They chose a bluffed and wooded site along the lake as Northwestern's home, purchasing several hundred acres of land from Dr. John Foster, a Chicago farm owner. In 1854, the founders of Northwestern submitted to the county judge their plans for a city to be named Evanston after John Evans, one of their leaders. In 1857, the request was granted. The township of Evanston was split off from Ridgeville Township; at approximately the same time, that portion of Ridgeville south of Devon Avenue was organized as Lake View Township. The nine founders, including John Evans, Orrington Lunt, and Andrew Brown, hoped their university would attain high standards of intellectual excellence. Today these hopes have been fulfilled, as Northwestern consistently ranks with the best of the nation's universities. 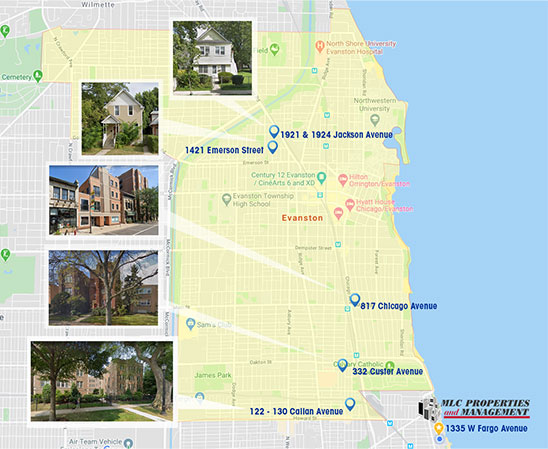 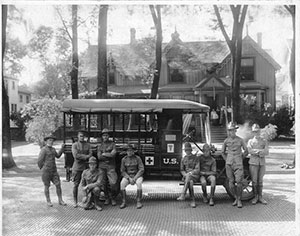 Red Cross vehicle donated by the WCTU, parked outside the Willard House (WCTU headquarters) in Evanston